A bank account is essential to our modern life - to get paid, purchase goods, pay bills and everything in between.

The UK banking sector has traditionally operated a free banking model - current accounts are a loss leader to get customers in and paid for by higher overdraft and loan charges.

This means there is little incentive for customers to switch and is why the majority of us setup our first account in our teens and then stick with that bank for life.

However, have you ever asked yourself if your bank is aligned with you ethics and values?

Skip straight to our recommendations for the most ethical banks in the UK.

What is Ethical Banking?

As it stands, there isn't a set of rules or regulations that a bank can adhere to to be labeled as 'ethical'.

So for now, we have to do our own research, and come to our own conclusions about whether a bank operates in an ethical way.

Off their own backs, many banks have started to produce ethical policies - which acts as a framework for how the firm will operate in a range of key business areas, which makes our job a bit easier.

A great starting point is to follow the money. This is going to be one of the biggest factors to determine a bank's ethical stance.

For example, does the bank invest in activities such as weapon manufacture, coal-fired power plants or fracking?

Other things to consider are:

Now we have an understanding about ethical banking, let's go through how the UK banking sector works and the players in the market.

The Players in the UK Banking Sector

Many of these firms own other brands as well, for example NatWest owning Royal Bank of Scotland (RBS) and the private bank Coutts.

They are so called 'retail banks' because they offer financial services to the general public and traditionally have branches on the high street.

Challenger banks are smaller, more modern retail banks that have come into the market to try and take market share from the big 5.

Prior to the financial crash of 2008 it was extremely expensive and difficult to acquire the necessary banking license to create a new bank.

The crash showed regulators that it was important to create more competition in the market and the requirements for setting up a bank were loosened.

Banks that setup after the time came to be know as 'challenger banks' - challenging the status quo of the big 5.

When Metro Bank received their license in 2010 and they became the first new bank to be created in over 100 years.

Banks aren't the only organisations that offer banking services to the retail market.

Building Societies and Credit Unions might sound like nicknames for banks but they are all actually types of mutual.

Mutuals are owned by their members (or in other words, customers) and operated as a 'not for profit' entity.

Also, every member gets one vote, regardless of amount invested, so everyone has equal say on important changes the management of the mutual may want to make.

The primary purpose of a building society is to offer home mortgages to members which are fueled by deposits (saving and investment) by other members.

A few building societies do offer small scale banking services outside this scope, such as current accounts and loans.

The first building society, Ketleys in Birmingham, was established in 1775. Members paid a monthly subscription into a fund and this was used to finance the construction of homes for the first few members.

Once built, the homes would be used as collateral to construct further homes for members. This continued until all members of the society had a house, at which point the building society was terminated.

The idea here was co-operation, one member on their own couldn't afford to purchase a house, but they all polled their funds it would be possible.

Many changes have happened since 1775, a key one being that building societies are no longer terminated, they just keep going on a rolling basis with new members replacing the old.

Very similar in structure to building societies, however their primary purpose is to provide smaller scale, unsecured lending.

Credit unions normally operate on a local or sector specific basis and many are actively engaged in challenging payday lenders and loan sharks, by offering a more affordable and secure type of lending for those that need it the most.

If you would like to know more this website can help you find your local credit union.

The key point to note is that building societies and credit unions are, for the most part, going to be the more ethical way to borrow or save money.

Because they are owned by their members and operated on a not for profit model, they don't have to please shareholders and constantly look to increase profit margins.

External shareholders are the biggest conflict of interest that banks have when they want to be more ethical.

Their not for profit model should also mean that they offer very competitive rates, if not the best on the market, but this isn't always the case.

One problem with building societies and credit unions is that they only offer limited services, usually related to borrowing or saving. If you are also looking for everything under one roof you may struggle.

Our Top 5 Most Ethical Banks in the UK

Triodos was established in the Netherlands in 1980 and it entered the UK market in 1996. Since then it has grown to over 73,000 customers.

Its founding principle is that banking can be a force for good, a so called 'ethical bank'. It looks to put social impact ahead of shareholder gains.

They breakdown their areas of investment into:

You can even see a map where each of the projects invested into operate. This reflects another key virtue of Triodos - transparency.

They believe that all banks should be open with where they invest their money.

Triodos also operate their own crowdfunding platform. Allowing you to make direct investment into small scale enterprises and ventures that align with your ethics.

Verdict: If you are looking for a bank with an ethics written into its constitution, you have found it. The ethical focus and transparency as a bank can only be challenged by The Co-operative Bank.

The Co-operative Bank is a interesting case.

As the name suggests, a co-operative is similar in nature to a building society or credit union, it is an entity that is run for the benefit of its members, rather than shareholders.

Prior to 2013 it would have ranked very highly on this list, maybe even taking top spot. However it ran into serve financial difficulties after finding a �1.5 billion black hole in its accounts.

To keep the bank afloat it took emergency financing from the US. This reduced the holding of the parent Co-operative Group to less than 30%.

A few years later, further money and restructuring was needed and the Co-operative Group sold the remains of its minority stake.

This means that, despite still holding the Co-operative name, it is no longer owned by a co-operative, rather, a range of US based hedge funds.

But don't discount it just yet! Soon after the black hole was discovered and seeing the potential damage an unethical bailout could cause to the bank, the good people at Ethical Consumer stood in.

They demanded that the bank retained its ethical constitution that had been the bedrock of its existence over the last 150 years.

In addition, they founded a union to hold the bank to its 'ethical policy', acting as independent oversight.

So what's in the Co-operative Bank's Ethical Policy? Well, its quite in depth, you can read the full version here.

But it includes commitments not to finance "the manufacture or transfer of armaments to oppressive regimes" or "any business whose core activity contributes to global climate change, via the extraction or production of fossil fuels".

Every few years the bank conducts a survey to make sure that their policy is still inline with the values of its customers, making changes as necessary.

Verdict: It's ownership does raise a few flags. Having said that, its engagement with stakeholders does show a big desire to continue its commitment to ethical banking.

The UK's biggest building society, Nationwide has been around for over 150 years.

They offer a full suite of financial services, from current account and investments to mortgages and insurance.

As a building society they are owned by their members (or put another way, customers).

This means they aren't constantly trying to increase profit, which is normally the case with traditional banks with shareholders.

From an ethical point of view, Nationwide have committed to leave no town or city without a branch, especially important for those without access to or the ability to use the internet.

They are also upgrading many branches to operate as community hubs, a place where you can meet up and have a coffee.

They donate 1% of their pre-tax profits to good causes with a focus on housing, whether that's a shelter for the homeless or supporting the construction of affordable homes for those in need.

Verdict: The best option if you want everything in one place.

While it may not be as active in the ethical space as Triodos or The Co-operative Bank, its mutual structure does compensate somewhat for this.

Since its establishment, Ecology has practiced what it preached:

Ecology specialises in mortgage lending specifically to people looking to self-build, renovate or convert buildings to be energy efficient.

They even give you an extra discount for having an energy efficient home.

If you are not in a position to qualify for one of their mortgages just yet, you can help on the other side by depositing your savings with them.

Your funds will become part of the pool that is lent to those looking to create the next generation of energy efficient homes.

Verdict: Ecology have a great ethos but their offering and therefore target market is a bit narrow.

You will likely need to combine their services with a one or two other firms in this guide.

In their own words, because they are such a small bank they don't have fully developed ethical guidelines like Ecology Building Society, Triodos of the The Co-operative bank.

They have a very vanilla banking model, they loan out a proportion of deposits to other customers in the form of loans and overdrafts. The rest sits in cash at the central bank.

In this regard, you can say that they are not unethical as they don't invest into questionable businesses, however, on the flip side, they aren't pro-actively ethical either.

Monzo is an online-only challenger bank, so again, by this virtue it has a lower impact on the environment than competitors that have physical branches. But this isn't by design, more by coincidence.

Verdict: If you are looking for a slick, simple, straightforward and low impact type of ethical bank, Monzo is a good bet. However if you want a more pro-active ethical bank, look elsewhere.

Switching bank accounts is now super easy thanks to a commitment by all banks to speed up the process.

What used to take up to a month to do now takes less than 7 days.

So there is no reason not to change to a more ethical bank today! 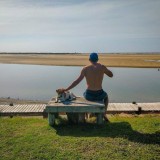 Founder of Reco, a marketplace and community dedicated to find shift from a single-use mindset to a multi-use one. #SingleUseSucks

Comments will be approved before showing up. For many years, investing has followed the mantra of chasing the highest return possible regardless of all other fact...
Read More